Last week I brought two nice looking pumpkins into the classroom. I put them on the table with 125 golf tees and couple of large wooden blocks. It did not take long before the kids started hammering the tees into the pumpkins. You could hear the knock, knock, knock all the way outside. And they were at it for two days straight! 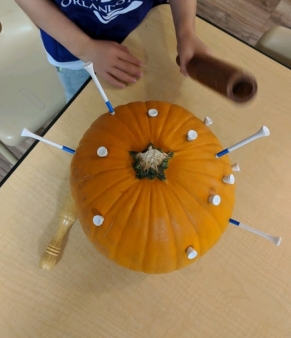 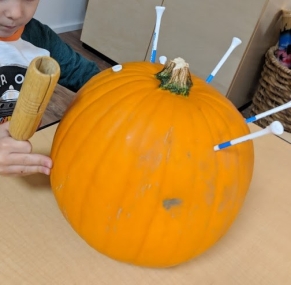 It is a classical fall project, I am not claiming any credit for it… but I absolutely loved the way the kids made it their own. It was amazing. Every child tried it for a little bit. They all experimented with different blocks as wooden hammers… but I had two kids that became true investigators and project managers. One of them tried to hammer the tees in very carefully, making sure they are spread nicely apart and that they do not necessarily touch each other. When she was done, she started decorated it with small rubber bands, making all kinds of shapes on the pumpkin, asking all friends to help do the same.

The other child decided that he will see how many tees he can hammer into the stem. He managed to hammed quite a bit of them – all over each other, on top of each other… again, asking his friends to join. In a short amount of time, all tees were used and reused, and the pumpkins looked like this:

I love seeing the huge difference in these projects – all the kids had the same things to begin with but by not saying ‘no you cannot do that’ or ‘that’s not the activity’ – we ended up with two amazingly unique pumpkins and a wonderful hands-on experience for the kids.

The question now was what to do with those pumpkins… and I am happy to say we found a great way to recycle and reuse them as much as possible. More next time.

0 comments on “Of Pumpkins and Hammers”