The scientific method is defined as a method of research in which a problem is identified, relevant data is gathered, a hypothesis is formulated from this data, and the hypothesis is empirically tested. And that is what we did yesterday in our Skittles Experiment.

We gathered our candy, looked at it, described it and saw how the color melts. We then placed them on a plate and wondered what would happen if we poured hot water on them. Kids formulated a hypothesis.

‘It will make a big circle.’

Then we tested our theories. Carefully observed and and described our observations. 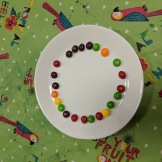 ‘It makes a circle.’

‘The yellow is all away from the candy.’

‘It is so colorful.’ 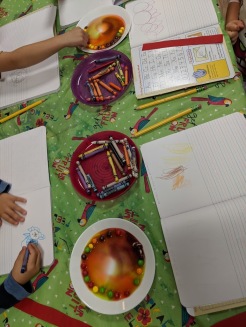 We got our journals and captured what we see. It was amazing to see that at the same table, four kids sitting next to each other decided to capture the experiment in a very different way. One captured only the colors, the other one only the shape, the third one captured the movement and the fourth one focused on one tiny detail. It made for a really nice learning lesson not only about dissolving but about seeing the same thing in a different way.